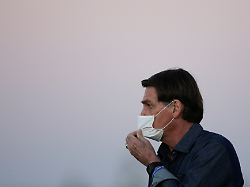 Because they spread lies and right-wing slogans, supporters of Brazilian President Bolsonaro can no longer access their Facebook account. The Brazilian Supreme Court enforces the ban – against the will of the company.
Facebook has also blocked the profiles of radical supporters of Brazil's President Jair Bolsonaro outside the country, as ordered by a Supreme Court judge in Brazil. Brazilian media reported this, citing the world's largest online network. Judge Alexandre de Moraes had increased Facebook's sentence on Friday for failing to comply with a previous judgment to 1.92 million reais, equivalent to 312,000 euros, a day and not excluding the responsibility of Facebook Brazil President Conrado Leister to draw. Moraes saw it as proven that Facebook had only blocked the profiles of radical Bolsonaro followers, contrary to his instructions, domestically. Shortly afterwards, they published their false information, anti-democratic slogans and personal attacks with changed location settings. The verdict is part of the investigation into an alleged fake news network. The target is supporters and supporters of right-wing President Bolsonaro, such as right-wing activist Sara Winter from the "300 do Brasil" group. Facebook wants to appeal Facebook criticized Moraes' decision as "extreme". It threatens freedom of expression and violates laws and jurisprudence worldwide, said the internet giant. Facebook announced that it would appeal. After the United States, Brazil is currently one of the focal points of the corona pandemic. So far, more than 2.5 million people have been shown to be infected with the virus. More than 90,000 patients have died in connection with the disease Covid-19. Bolsonaro claims that he also fell ill, but is now considered to have recovered. He kept dismissing the infection as "mild flu". Since then he has been looking for the public and ignored distance rules. In the past few days, there have always been large crowds of people performing. In Brazil, around 69,000 newly infected people were recently reported within one day.