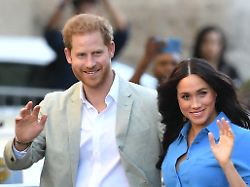 Harry and Meghan have always had a special relationship with Africa. Now the couple are supporting the African charity Camfed with a generous donation. Women and girls in particular should benefit.
Prince Harry celebrated his 36th birthday on Tuesday. The Duke of Sussex used it together with his wife, Duchess Meghan, for a special donation. The two donated 130,000 US dollars, the equivalent of around 110,000 euros, to the non-profit organization Camfed, as can be read on their Twitter profile. Camfed is primarily committed to fighting poverty in Africa through support programs for girls and young women. "There is no better way to celebrate what really matters," Meghan and Harry were quoted as saying. With their payment, the two royals doubled the sum of a fundraising campaign that had been running for a few days and which ended up bringing together $ 129,000. Harry and Meghan also addressed their words directly to all supporters: "Thank you to everyone who donated." Special relationship with Africa The couple have been ambassadors for the charity for several years. That's why Harry visited the African country Zambia in 2018, Meghan already appeared together with Camfed director Angie Murimirwa at a panel discussion on International Women's Day last year. Harry and Meghan have a very special relationship with Africa. In 2016 they spent a five-day camping trip in Botswana. In summer 2017 they returned to the landlocked country for a long love vacation. Last year Meghan surprised her husband and recreated their trip to Botswana in their home garden. As an anonymous source revealed to People magazine, Harry celebrated his birthday this year in silence with his family in Santa Barbara. So there was no big party, but video chats with dad Prince Charles and brother Prince William.