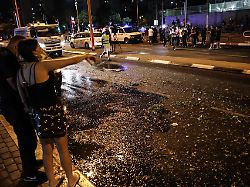 Israeli air forces attacked targets in the Gaza Strip that morning, according to Palestinian security forces. In retaliation for a previous missile attack by Palestinian militants, Israeli planes hit two targets. At least two people have been injured.
Shortly after signing historic agreements with the United Arab Emirates and Bahrain, Israel launched air strikes in the Gaza Strip. Several places in the coastal area were bombed in the morning, according to Palestinian security sources. It was evidently retaliation for rocket attacks that had been launched against Israel from the Palestinian Territory the previous evening. According to rescue workers, at least two people were injured in Israel. It initially remained unclear whether there were also injuries in the subsequent Israeli attacks in the Gaza Strip. In several Israeli locations along the Gaza border, sirens wailed before sunrise. A few hours earlier, Israeli Prime Minister Benjamin Netanyahu said about the agreements with the Emirates and Bahrain that they signaled a "dawn of peace" in the Middle East. The agreements are vehemently criticized by the Palestinians. Palestinian President Mahmoud Abbas said that there would be no peace without an end to the Israeli occupation in the Palestinian territories. The Palestinians fear that their quest for a state of their own will gradually lose support in the Arab world. Hundreds of people demonstrated against the agreement on Tuesday in the Palestinian Territories. According to the Israeli army, one of the two rockets fired from the Gaza Strip that evening was intercepted. The second hit the coastal city of Ashdod. The agreements to normalize Israel's relations with the Emirates and Bahrain were negotiated with the United States. They were signed in the White House in Washington. US President Donald Trump predicted the agreements would become "the basis for comprehensive peace across the region." So far, Egypt and Jordan were the only Arab countries with which Israel had formal relations.