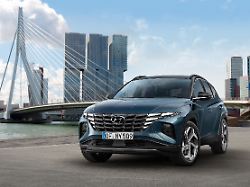 As a hip opponent of the VW Tiguan, the Tucson had everything it needed not only technically but also optically. Now Hyundai presents a new Tucson, which could have sprung straight from a manga, with a new interior and electrified drives.
After three years of construction, Hyundai is sending the Tucson compact SUV into a new round. The fourth generation comes up with a completely new and for German eyes quite idiosyncratic design and a fully electrified drive range. The market launch could take place at the end of the year at prices from 25,000 euros. The style of the new Hyundai Tucson is to become a trademark in the future. (Photo: Hyundai) The most striking feature are the headlights that merge directly into the radiator grille: when switched off, they can hardly be identified as lights and only reveal themselves as such when activated. The front mask looks like it is composed of individual facets, which is supposed to be reminiscent of crystalline minerals or cut gemstones. There is a similarly noticeable light signature at the rear. The style that Hyundai calls "Sensuous Sportiness" is to become the future trademark. The model is the "Vision T" study, which will be shown at the Los Angeles trade fair in 2019. The designers have also cut hard edges into the sheet metal, which clearly drive the new Tucson into the manga corner. If you look closely, you may see a similarity to Toyota's SUV design. It remains to be seen whether these oversized tricks in the dress of the South Korean will appeal to German and European audiences. Even fans of sharp edges could get one too many here. New interior, electrified drives Sharp edges in the sheet metal that have not been seen for a long time characterize the Hyundai Tucson. (Photo: Hyundai) The interior has been completely redesigned, with a large central display now catching the eye. There is also a smaller screen behind the steering wheel, which replaces the analog instruments. The layout should not only look modern, but also enable new networking functions. Among other things, profiles can now be created for individual users, real-time navigation can be used and vehicle data can be retrieved remotely. As for the drive, the Koreans, like other manufacturers, are rolling out electrification on a broad basis. There is an externally chargeable plug-in hybrid with a nominal output of 265 HP and a conventional hybrid with a system output of 230 HP. The combustion engine is based on the 1.6-liter petrol engine, which is also available as a 48-volt mild hybrid. There is then a choice of output levels with 150 hp and 180 hp. The 1.6-liter diesel with 136 hp is also mildly electrified. Of course, the interior of the Tucson also has a new design. (Photo: Hyundai) Unusual: The technology is not only available in combination with a seven-speed dual clutch automatic, but also with a six-speed manual transmission, as is currently the case in the Kia Sportage 1.6 CRDi. The basic diesel variants with 115 PS get by without any e-support. And the 150-horsepower gasoline engine is also available without 48-volt technology. As usual, the new Tucson is also available with all-wheel drive in the more powerful versions. For the first time in the range are adaptive dampers, which allow the character of the chassis to be adjusted, and Hyundai has stepped up in terms of safety and assistance. Seven airbags are always on board, including a central front airbag that is designed to prevent the driver and front passenger from colliding in the event of an accident. The emergency brake assistant also detects oncoming traffic when turning left, the blind spot warning not only sounds the alarm, but brakes automatically in an emergency. If desired, the Tucson will automatically follow the lane and the vehicle in front of you on the motorway.